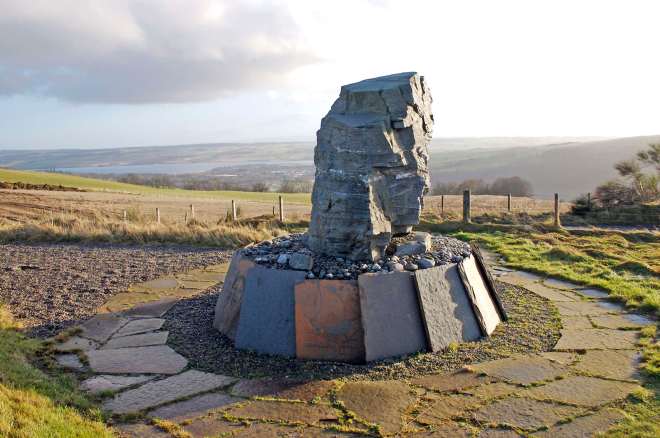 The History of the Monument

The site chosen for the Monument was right next to the Heights Road, giving easy access; it offered tremendous views to the West with its mountains and ridges, and to Dingwall and the Black Isle beyond (marvellous descriptions of both appear in The Serpent and The Shadow). The little croft road immediately to the east of the site was the road taken by Neil Gunn on his daily walks from Brae Farm House (just to the north of the Dingwall to Strathpeffer road), then on and up to the moor and beyond to the River Skiach and the lower slopes of Ben Wyvis.

The piece of land offered to the Trust by Isobel Macdonald, the crofter, and agreed to by Rory Macintyre, the landowner, was really just a corner of a rough grazing field, but nevertheless was given to the ownership of the Trust with generosity. One of the Founder Trustees, Douglas Murray, a local architect, drew up the first site plan depicting the shape that the Monument and Viewpoint would become. Kerr Yule, who became the Convener of the Trustees, approached Alex Brett, a local builder and tradesman of note, to undertake the task of erecting the Monument and laying out the Viewpoint.

The strange thing was that you would think it an easy task to find a suitable stone in the Highlands of Scotland, but that didn’t turn out to be true. The idea of the stone was to resemble the Standing Stones of Caithness, where Neil Gunn had been born and spent most of his childhood years. After searching for a considerable time, a suitable stone was discovered in a quarry not far from the Falls of Rogie. This stone had to be prised out of the ground by a very large crane and transported to the Monument site, then lowered onto the plinth which had been prepared by Alex Brett and his workers. The giant stone weighed 7.7 tons and is made of mica schist.

At a later meeting of the Neil Gunn Trustees, seven local and enthusiastic people, it was decided to surround the plinth with upended Caithness slabs. After consideration, the Trustees thought that it would be an excellent idea to carve images on every second slab, depicting some of Neil Gunn’s very moving quotations taken from several of his most popular books written at Brae Farmhouse, where he and his wife Daisy lived for eleven years.

Approaching the entrance to the Viewpoint we are met by the Tryst Gate, which depicts the concept of a stone thrown into a pool with the ripples going out in all directions. The circle at the top of the gate is one complete piece of metal – there are no joins. It was made to resemble a stone post, found on the moor, not far from the present monument, where perhaps a young couple could vow to become betrothed or two men could shake hands over the sale of cattle.

On either side of the gate are two upright Caithness slabs; on the left is carved “For Love is the Creator” and on the right “And Cruelty is that which Destroys”. John Pick, one of Neil Gunn’s two biographers, said that of all the words that Neil Gunn had written, this quotation best illustrates the essence of the man. Once through the Gate you will discover two other quotations carved on Caithness slabs on the West side of the drystane dyke.

Advancing up the Caithness slab path towards the monument, words are left behind and symbolism takes over. The monument itself is circled in Caithness slabs, each alternate one with an incised symbol from Neil Gunn’s writing.

The first has a salmon swimming in a pool underneath a hazel tree. The hazel nuts of knowledge fall into the water and are eaten by the salmon, which becomes the Salmon of Wisdom. Whoever is fortunate enough to eat part of that salmon will then have “The Great Wisdom.”

The next incised slab depicts a very old man – can this be Hector from Young Art and Old Hector – or could it be Sandy from Blood Hunt?

Further round we have The Serpent. This is the story of Tom, an old man by this time, looking back over his life, describing the scene you are looking at now:

“ ….. a fine wide sweep of country. The liberation of the hills was upon him, of the wide stretch of valley land that went away towards the town, of the sky that ran with the high horizons of the earth, a summer-blue sky alive yet half-dreamy with white clouds, distant horizons with the blue arch flattening beyond them into unimaginable remoteness.”

Then follows the Harvest Scene from The Shadow :-

“—– the full harvest moon rose over a low ridge of hill. It was golden and immense, august and slow; it was the ancient harvest moon of many rites.”

Now we come to The Silver Darlings, arguably Neil’s most popular book:- “…. the little silver fish, the swift flashing ones, hundreds and thousands of them, the silver darlings.”

Next appears “the strong hand on the tiller” – this is assuredly Roddy, another character from The Silver Darlings.

Moving along we come to ‘The Woman’, who plays an important part in many of Neil’s books.

This is Mary in The Green Isle of the Great Deep:- “Here at last was Woman, who for the warmth of life, and for the love that sprang out of life and made life, would fight till the stars went down in their courses and rose no more” and “A woman always fights not for a theory, not for a system, but for life. For dear life”.

Last we come to ‘The Boy’ who appears in many of Neil’s best books – Highland River, Young Art and Old Hector and The Green Isle of the Great Deep. “There was an inconsequence about the boy, a bubbling up of life, so vivid, so real, that it was more real than anything else.”

These carved stones speak to us if we have a receptive mind. Many people visit the monument in times of personal distress and there find comfort and solace. Even in this very modern age it would appear that The Stone Voices are still being heard!

All of this was not the work of any one person; all seven Trustees threw in their suggestions to the melting pot, and gradually the shape and form of the Viewpoint began to emerge.